Is M F Hussain not an Indian ? 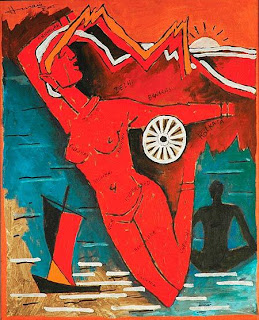 India's eminent artist M.F. Husain, who has been under legal attack from Hindu fundamentalists for his paintings of Hindu goddesses/Bharatmaata and has been living in Dubai and London, has been given Qatar nationality.......  Now he has to give up the citizenship of the land of his birth, which he has lovingly and secularly celebrated in his art covering a period of over seven decades. India does not allow dual citizenship........

Is he no more a Indian now ?

Secularists :
Many sympathisers, including politicians, artists, media, etc of Hussain  have  expressed grievances over this news. Government has even offered security to Hussain if he is willing to come back.

Many eminent and prominent elites, including The Hindu's N Ram,  often cite the example of Khazuraho temples to support the nude portrayal of Hindu gods . Why dont they understand that the opinions, approaches, attitudes, towards nude art do change from one century to another century? Shall we start projecting nudity just because once we were as nude as animals in the evolution?


Cultural Policing :
I am neither a patron of Bajrang Dal/RSS/VHP/Sangh Parivar nor a Theist, but still i do have sentiments regarding my culture and the way i live. Both the so called secularists and the so called Hindu religion protectors are using the issue to meet their vested interests. 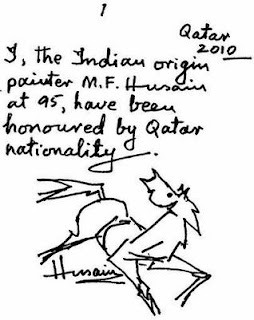 Artistic Freedom :
I do welcome Mr Hussain to India . Before that, I am looking forward if he can answer my queries.

My concern is, why do we have double standard approaches to the same Mistakes/Wrongs ? Do we need to demarcate wrongs into Saffron Wrongs, Green Wrongs etc? Is this all the Secularism we are boasting about since 60 years ? Why do we have preferential and appeasing treatment to some sections of the society ? How many more years do these Hypocrisy and Sycophancy dictate the things in this secular country?


BTW, how many of you find the above picture of Bharatmaata as obscene?

PS1 : I have nothing against the mentioned religions in this post. If I hurt anyone's sentiments, I apologize for that and will remove that content.

PS3 :  M F Hussain has been called the " Picasso of India".
Written by Mahesh Aadhya Kalal at 5:27 AM
Email ThisBlogThis!Share to TwitterShare to FacebookShare to Pinterest
Labels: India, M F Hussain, Religion

It suits a lot of "secular"politicians to speak in favour of Hussain.Personally, I have nothing against him except that he has hurt the Hindu sentiments.Those who are showing glycerine tears,must clear their stand on Hussain painting hindu Godess in the nude--do they support Danish episode?
Why is that any action by a Hindu is communal and rest all is secular?
While he has 900 cases against him in India, how can he run away?

I thought you are the authenticated person to have a take on this topic and am glad that you read it. Thanks for the response.

Let him go yaar, how does it affect us?

Though personally, I don't feel offended if someone potray God in nude form, I find it all hypocratic and double standard those who support and voice against MFH as well as Hussain himself. You have put my thoughts clearly in the post. At the end of the day its all about vote bank politics and including so called hindu champions (who keeps away from the serious concerns of the religion that need real attention)

That was a nice painting. I wonder why anyone will have any problem with it. We should just enjoy an art and not judge it, isn't it?

I wonder why we make hue and cry about such matters and not about things that are more important and serious!