Note:- 55 Fiction infers to fictional writings bounded to a maximum of fifty-five words.

He is been lying beside his wife, day and night, since nine days without food. He can hardly move his body. The only thing which keeps him alive is a water bottle . He didnt give up. He has got only two things, his dead wife and Hope, under the rubble of an earthquake hit building. 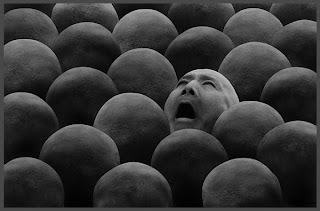 PS1: An estimated three million people were affected by the earthquake in Haiti.

PS2: I thank Nethra for  motivating me to comeback with a 55ier :)

Written by Mahesh Aadhya Kalal at 12:20 AM
Email ThisBlogThis!Share to TwitterShare to FacebookShare to Pinterest
Labels: 55 Fiction, Life

That was a touching one for sure!
Kani 9 days with only water..hmm
anyways good one!!
Thanks to Nethra too!!
Luv your 555 fictions!

Sad and possibly true...horrors of Haiti remind me of Latur.
Well written Mahesh.

Thanks for your response :)

Nine days without water is a real time incident happened in Karnataka four days ago......
Thanks for the question

Welcome to wisdomism and thanks for the pat :)

A wonderful 55er about earthquake. One shudders to think about what it would be like to be lying under that rubble .. :(