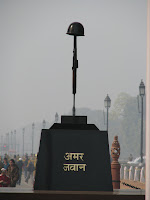 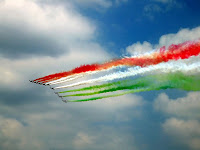 
The 60th anniversary of India becoming a republic has come and gone. Fireworks, salutes to the tiranga, distribution of awards, parades, display of our military might and what not. But the real issue amid the festivities seems to have been lost somewhere. We boast that we have been a democracy for six decades — and point out that the same is not true of our neighbours — but are we truly democratic? Have we lived up to the ideals cherished in the Constitution?
Our foreign policy changes according to the dictates of Washington; education has been commercialised; there is too much privatisation; there has been a decline in vital subsidies; we have blatantly failed to instil confidence among the minorities and are yet to fulfil the people’s regional aspirations. We can, at best, celebrate Republic Day as yet another festival.
* * *
Democracy has helped only our politicians. Many of them got an opportunity to become billionaires after a decade or so in politics. Our criminal justice system is all but ineffective in curbing corruption, which starts with the ballot box and ends in Swiss banks.
Politicians have mastered the technique of purchasing the illiterate masses on the eve of elections and use state funds to market their party to the same masses by offering freebies. Those who can change the system refrain from voting due to frustration and, in some cases, fear. Our democracy is the best bet for Swiss banks.

* * *
The annual Republic Day parade is an occasion to showcase the country’s achievements in the military, cultural and economic fields. But it is also true that enormous resources in terms of money and manpower are spent in organising the occasion. This is particularly true in the current security scenario when such functions have to be organised under the shadow of possible terrorist attacks. In view of this, we should seriously consider having such huge celebrations at intervals of three-four years. 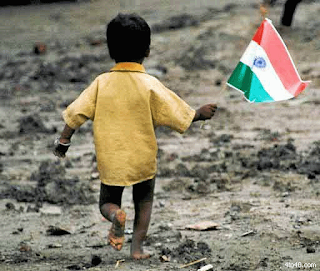 PS: I will add all the suggested additional facts , if any, from the readers. Thank You.

Written by Mahesh Aadhya Kalal at 3:01 AM
Email ThisBlogThis!Share to TwitterShare to FacebookShare to Pinterest
Labels: India

In my opinion, the reasoning that we lag behind in many parameters in controlling corruption, providing education to all, health care for all should not be tied up to the celebration of Republic day.

Do we stop celebrating our festivals (religious or cultural) just because we failed to get promotion at work or got low grades in exams ? We do celebrate the festivals and if we learn from mistakes we try to correct our mistakes and try to achieve more in life. So it is with nation.

Our generations have not seen the independence struggle just heard and read about it. But Such national celebration should be designed in a way to instill the spirit of independence rather than just showcase our strengths.

I haven't yet read this post completely..so will come back again and read it :~)

I did read your post on R day...
the makky in ur comments section is me.

I agree with you, absolutely, word by word.


1.Do we stop celebrating our festivals (religious or cultural) just because we failed to get promotion at work or got low grades in exams ?
--> My intention is to say that we do definitely dont celebrate if someone in our family is sick and needs urgent treatment. So, is in India. We have two indias, 1. Globalised Corporate India
2. The other India.


2. But Such national celebration should be designed in a way to instil the spirit of independence rather than just showcase our strengths.
--> I agree with you. This is want I am saying. We need inclusive celebrations, like inclusive development. My concern is about the way we celebrate these national festivals. We need retrospective celebrations.

Thanks for thr facts...me being poor in GK no wonder din't knew many facts..