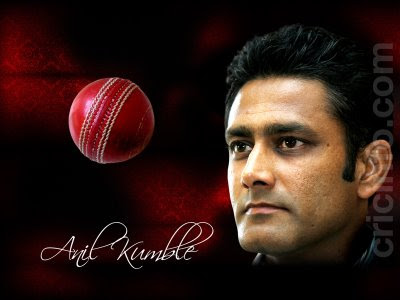 Whatever and whoever rises, has/have to fall, may be its an Universal Law. I strongly believe that though most of the events happen in our life are not in our control but the way we respond to them is. I am crapping this stuff coz one of my two cricket heroes,"KUMBLE" , whom i admire a lot since my childhood, for both his cricketing and personality traits, is now out of the international cricket arena . Anil Kumble is without doubt India's greatest spinner of all time - not only in terms of wickets but also by being a member of the winning team on more occasions than any other bowler in the history of Indian cricket. I could have gone for some adjectival jargon to show off my feelings towards him but the indigestible tough truth, that i can no more see his humble and modest smile whenever his awesome and amazing Googlies kissed the stumps, stops me. He is a true and grace gentleman with sporting attitude. The way he dealt with both success and failure with stoic approach guides me in introspection. I will always remember his killer instinct, the commitment and the dedication he sported when he took Lara wicket in spite of a head injury with a bandage around his head.His passion and thirst for the game is highly commendable. The way he gave himself 100% towards the game and nation shows his spirit as a player. He has reached heights in his career not by defeating his counterparts but by winning on himself day by day.

Though he has crossed many milestones in his career, his down-to-earth attitude is an eye-opener to many who take even a small success to their heads. He had responded to his criticisms by not responding at all,but rather, with his wrist. He has never reacted, but RESPONDED always.The way he recognises and praises his buddy and companion SACHIN proves that only a great person can acknowledge another great person. I strongly feel that a person like KUMBLE deserves a decent farewell with a test match win, but to my disappointment he even didn't get at least a wicket on his last day .May be the only option he has got is to respond.Hmmm.... at the end of the day, Life gives you Events and ur happiness depends on what you are going to do with those Events....Reacting or Responding. He is the real star without stardom and major endorsements.It is difficult to replace this fighter,match-winner, team man and great thinker on and off the field . I wish my hero a perfect non-cricketing life, in his own way, with same approach and attitude. Well done, JUMBO. Keep Responding.

Written by Mahesh Aadhya Kalal at 1:37 AM
Email ThisBlogThis!Share to TwitterShare to FacebookShare to Pinterest
Labels: cricket, Kumble