Is GOD, in your hearts, listening ??? 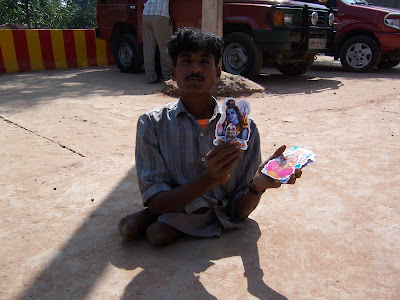 When was the last time you had a visit to a temple with bunch of resumes(Wishes and Desires) of Life ?....very recently?....Yeah, obviously and desperately, as our jobs/careers/futures are at the mercy and clemency of corporate Gods. Generally our religious temples are filled with "social resumes"(rituals) consisting of our personal desires like money, fame, jobs, promotions, health, success, solutions etc...... Its a healthy practice too as we will get some psychological backup that at least someone is taking and reading our glitzy, pompous, pontifical, grandiloquent resumes and soon they will be granted and fulfilled by the so called credible-supernatural-occult-powerful GOD. This established procedure of "belief" has been widely practised, routinely, since ages . Many of us call it spirituality . Some may even term it as Morality and Ethics. I call it a stereotyped religious custom. Whoever calls it in whatever manner,it doesn't matter as it is a personal and an emotional perception and moreover it doesn't hurt anyone too.But my Question is why do you need to bribe your trustworthy,authentic and responsible God in the name of Devotion? Does God really need praises and complements in the form of Mantras and slokas to appease him? Is GOD really desperate for milk baths u pour,golden jewellery and rathas u donate, beautiful garlands you present,animals you sacrifice and money shares u offer?. Does GOD solve all our issues/problems only if we treat Him with magniloquent-portentous-stunning rituals and ostentatious ceremonies ? Aren't you humanising GOD by doing so? Yes, of course, its a quite common tendency of human beings to pour favours for anyone who helps us out in our tribulations. But don't we have a better way to show our gratitude towards GOD in whom we trust immensely ??

These questions, which made my evolution process( as an agnostic) much faster, became more intense and acute when i came across an incident, happened with me in the holy pilgrimage of Srisailam in 2006 .On that auspicious day i had participated in abhishekam pooja along with my parents. After performing the pooja, as we stepped outside the temple premises , we were smothered by a pack of beggars for alms. Among them not even a single person deserves to be a beggar. They were stout and sturdy, in fact healthy. They can easily earn for themselves. I saw many of other devotees donating coins to them(Compulsion?). We were reluctant and somehow escaped from their clutch. Then i met a handsome(???) guy, in the above picture, who could hardly move as he was physically challenged . He was displaying some God's photos in his hands. As usual, i thought he approached me for alms and i was about to pick some coins from my pocket to donate him. He said humbly and hopefully "Sir,please buy, 10 photos-5 rupees only......". To my surprise and astonishment he wasn't begging at all, in fact, he was selling those photos. I was totally taken aback by his temperament and attitude towards his Life. For the first time my face sported a new expression which cannot be termed. Though he deserves begging , he is trying to feed himself by earning in a decent way. Is it Determination or compulsion?.His perception of Life made me busy in digging for those highly enriched rare adjectives, which i have never used, to describe his "struggle for existence ".He wasn't complaining against life but adapting to his situation in the best possible way. His humble gesture had suggested many positive things regarding attitude and approach towards one's life.He was responding to Life, he was flowing with Life, but with elegance.

I witnessed many queries popping out of my mind since then. What does he pray to God? Isn't it so called powerful God responsible for his in-equal, partial , biased and imperfect Creation? Now please don't say Karma philosophy...... How does your rituals(worth of thousands), mantras, slokas help this guy anyway? Who is a true devotee? Where is GOD ? Is he sitting inside the temple or in the hearts of those devotees who are willing to help such deserved forever life fighters? Isnt it the time to redefine GOD? Is reading slokas without knowing their meaning Spirituality? Isn't it buying two artificial legs for this guy is more spiritual and satisfying than donating gold ornaments for the idol in temple? Does your GOD won't accept this? Why does your social resumes never contain such humanising acts? Does writing and reading this blog impacts him anyway? Isn't this guy handsome? And finally.....

Is GOD, in your hearts, listening ???

Written by Mahesh Aadhya Kalal at 2:02 AM
Email ThisBlogThis!Share to TwitterShare to FacebookShare to Pinterest
Labels: Mahesh, Religion, society

First 'Though he deserves begging ...' this is completely wrong statement please correct.

Second Karma philosophy is no where related to your logic, in fact it states states that every living creature is an image of GOD (atman and paramatman).

From this post, I think now you are in the right path... LOOKING FOR ME IN THE RIGHT PLACE.

The on in the picture, watch him he is standing tall not like the one begging. Do you still think, he needs something from you or me? He himself showing us the way to live life telling - don't blame me(GOD). He is living by selling my pictures, to the people who believe in GOD.

Thanks for commenting on the most neglected topic of my blog..

--> God, the context was in comparison of this Differently Abled guy with other others who were physically fit. It was written not to undermine/demean the ability of this guy , rather, to criticize the shameful act of his fellow beggars. It was bit sarcastic on their part.

Generally near temples we see people with physical disability as beggars and we do sympathise/ empathise with them with their genuineness. So my context of intention was in support of him by appreciating of his act of livelihood in comparison with other beggars. Clear God??

2. Karma philosophy is no where related to your logic,

3. The on in the picture, watch him he is standing tall not like the one begging. Do you still think, he needs something from you or me?

--> Where did i say that he is begging.
--> I did project him tall
--> I dont know why you are talking hypothetically. Are you angry God?

4. He himself showing us the way to live life telling - don't blame me(GOD). He is living by selling my pictures, to the people who believe in GOD.
---> isnt it Narrow Subjective interpretation???. I am very poor in such things. I know you know only this
--> God, Have you ever tried objectivity and rationality

--> What will you say if the same person would have sold icecreams
instead of ur pics? Divine cream??

Oh, God is present everywhere and in every object right. Hmmmmmm.... Then i say you are the culprit.

5. I think now you are in the right path... LOOKING FOR ME IN THE RIGHT PLACE.

--> Sorry am not looking for you. You are just a concept . Man made creation. I need not follow you.
I follow humanity .
I follow Evolution(which you can hardly understand)
--> Right path, yes, but the destination is not u. It is self actualisation.

Now please dont say that God is self actualisation, God is humanity etc.
I know you are very well at fabricating stories.

For now, all I can say is you will find me at the end of your search. No need to request, as I am already staying in the hearts.